To most, seeing Rihanna in a new fashion editorial spread is a treat. This fashion-forward chick is always pushing the limits and boundaries, trying daring costumes and trends that almost always work, but there are always going to be critics. With her new shoot in the August 2019 issue of Harper’s Bazaar China, the singer drew controversy after she was photographed in traditional Chinese garb.

Almost immediately after the Bajan singer posted photos from the shoot, fans began tweeting in a frenzy with accusations of cultural appropriation. 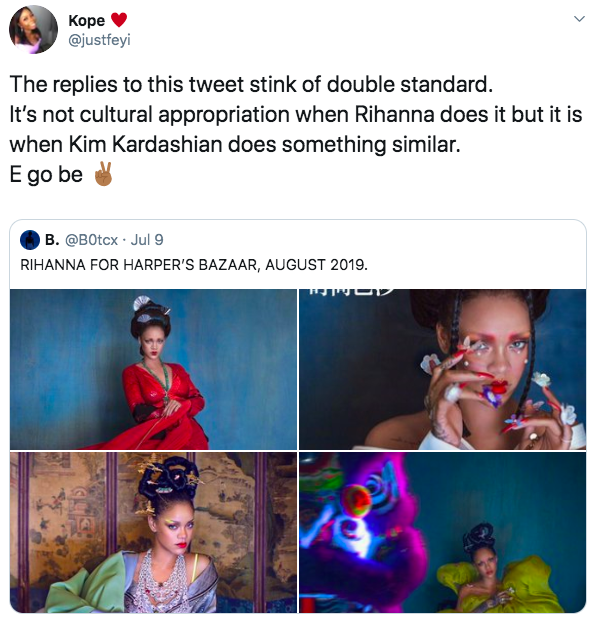 This isn’t the first time she’s been accused of appropriation for an editorial spread. In September of 2018, Rihanna graced the cover of British Vogue, to which she was met with accusations of appropriation by Mexican-American women. Writer Krysty Chavez wrote an op-ed for Marie Claire slamming the singer for her skinny eyebrows. “RiRi’s brows look a lot like the Chola brows our mothers feared we would one day wear,” Chavez writes. “The brows that are now untouchable and unwearable to women like me, especially in conjunction with hoop earrings and, god forbid, lip liner.”

Of course, when the accusations of her Harper’s Bazaar spread began, Twitter users began to compare this to Kim Kardashian’s shapewear line, “Kimono” – which as many know as the traditional Japanese robe. The Kardashian-Jenner clan have been caught up in more than one cultural appropriation scandal – from Kylie’s cornrows to Kendall’s insensitive Pepsi commercial. There’s one difference between every instance with the Kardashian-Jenner clan and Rihanna’s most recent photo shoot. One is blatant insensitivity in an attempt for likes or making a quick buck off a new brand and the other is a carefully thought out editorial with people from the culture, shot in the country, by Chinese photographers, stylists, and art directors.

Singer, icon, entrepreneur…… Rihanna ( @badgalriri ) has different titles and gets more and more influence at the same time. With the influence, she chooses to make a voice for the minority, showing the incredible feminine power. @shasimona @weitian25 Photographed by @chenman Chief Producer #左敏洁 #harpersbazaarchina #augustissue #rihanna

Channing Hargrove, a writer for Refinery29, penned an op-ed countering to appropriation accusers and comes to Rihanna’s defense. “It’s disrespectful to take the Japanese word Kimono, give it a new definition, and then try to make money off of it. Same with co-opting the Black Lives Matter movement to sell soda,” Hargrove writes. “Rihanna, by contrast, is paying homage to Chinese culture — in a Chinese magazine wearing outfits styled by Chinese editors.”

How to Make Homemade Ginger Ale