Her first time at the Golden Globes Tracee Ellis Ross not only looked vibrant in all shades of excellence, but she also won the coveted statue for best actress in a TV series comedy/musical for her role as Rainbow, in the ABC hit show Blackish. She also unknowingly gave birth to us Hueish, and our mission.

ALSO READ: WHAT IS HUEISH? 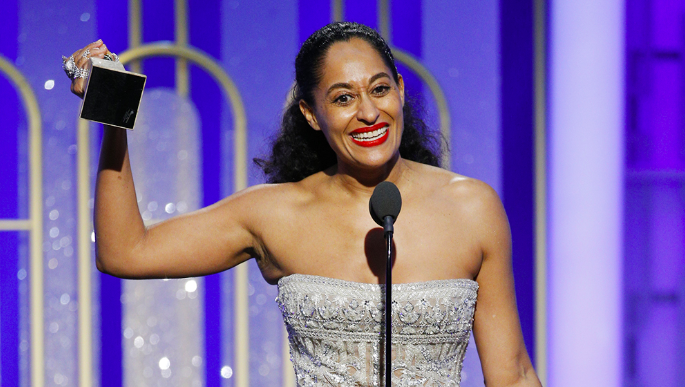 “This is for all of the women, women of color; colorful people whose stories, ideas, and thoughts that are not always considered worthy, valid, and important. But I want you to know that I see you. We see you. It is an honor to be on this show, Black-ish.”

She continued, “To continue expanding the way we are seen and known. And to show the magic and the beauty and the sameness of a story and stories that are outside of where the industry usually looks.” – Tracee Ellis Ross

In Ross’s acceptance speech, she made it clear that the show’s cultural significance and inclusiveness were not lost on her.

This is just pure and honest serendipity. We purchased the name of this domain in 2009 (we got receipts) before the show came along. Yet, the founder never knew that the launch of the platform would co-star next to so many amazing culturally inclusive moments including Ross’s speech.

Nor did we know what we’d use this domain for.

Hueish ™ is powered by and driven by one mission: inclusion. Making access to every shade/color of creative genius, innovator, tastemaker, and badass in tech, culture, and media fun, engaging and easier.

Mainly because at this time, we seem to be constantly reminded of our differences. Hueish is for all colorful peoples whose stories, brands, ideas, and thoughts are valid and can be seen and accessed on mainstream platforms easier.

We are tired of the “digital divide” where cultures and people are perpetuating digital segregation. Is it too much to ask for a power list of engineers in tech to include all races and faces?

We want a platform where success, worries, and challenges of people of different cultures, preferences, and lifestyles can be featured on one page. (Read | 90 Content Creatives You Should Know) . It saddens us to see pages or entire websites sites separately addressing those who feel a lack of representation.

Do we need black entertainment television or do we need entertainment television that innately includes black people and all other races? Do we want to be featured in Latina as a top marketing and media executive because we’re Latina? Or because we’re f*ing talented? Can we just have media platforms that bridge the divide and share our excellence regardless of our origin?

God I needed this moment. I’m bursting with pride! I ❤u Tracee!!

It also makes us wonder if the continuous separation perhaps niching of sites focused on specific races, religions, etc. are perpetuating the digital divide?

However, we know they are needed because the mainstream has failed us. So the brave have decided to not wait but create the opportunity for their story to be represented and shared with everyone.

We are excited to attempt a mainstream platform that fuses stories of those across race, culture, and lifestyle in order for we, as a people, to appreciate the differences that make us one.

We’re in a time where honest series and purely un-adulterated content on race, culture, and traditions, are being pushed out.

We hope that you join us by sharing your stories, feedback, and input in what we consider the future of publishing. It is our vision that you rise in love with every hue of life which is so very Hueish.

Africa Fashion Week results increased brand awareness 8.5 million views; $300+ K in revenue generated per event, and 6 K+ newsletter subscribers per event.  Media giants such as Hearst Magazines caught wind of my work and influence — the ability to connect to and with consumers through culture content and experiential solutions. HEARST immediately hired my consultancy to advise, produce content, and launch its international spin-off of COSMOPOLITAN Nigeria.

10 Makeup Brands Owned by Women of Color Worth Buying